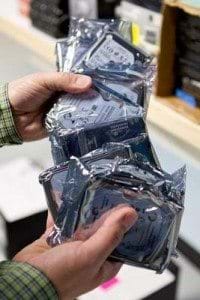 The Omaha World Herald visited Schrock Innovations’ Papillion Service Center to visit with Thor Schrock about the impact that Thailand flooding is having on the availibility of hard drives this holiday season.  The text of their story follows:

A bad dream is playing out in Thailand and turning into an unpleasant and costly reality for Midlands computer retailers and repair shops.

The Southeast Asian country, which is grappling with the effects of devastating flooding and evacuations from its largest cities, is home to many of the world’s largest computer hard disk drive manufacturers, including Western Digital, Seagate Technology and Toshiba Corp.

Over the last three months, floodwaters have crippled hard drive manufacturing facilities, bringing hard disk drive and component production to little more than a trickle. Hard disk drives are about the size of a small book and serve as the main storage components in computers, holding information about the machine’s operating system and other software.

Analysts and computer store owners who serve Nebraska and Iowa say the shortfall of hard drives is going to take its toll on the holiday shopping season and could last well into 2012. The issue could mean disappointment or lighter wallets for consumers planning to give certain electronic gifts.

“It’s a nightmare scenario for us,” said Thor Schrock, owner and CEO of Schrock Innovations, a computer retailer and repair shop with locations in Omaha, Papillion and Lincoln. “And it’s only going to get worse.”

At the beginning of November, Schrock said, hard disk drives already were becoming so expensive at wholesale prices that he spent $27,000 at Office Max and bought as many hard drives as he could.

“We cleared out three of their warehouses,” Schrock said. “In order to get to the end of November, we needed more hard disk drives.”

He said there may not even be enough available hard drives to maintain a predictable inventory, especially of low-priced netbooks.

Fang Zhang, an iSuppli analyst, wrote in a research note that Western Digital will likely be knocked from the No. 1 perch of hard disk drive producers because of the flooding. Zhang also predicts that the shortage will become more serious at the end of 2011 and pour into 2012, at least through the first quarter.

During that time, shipments are expected to decrease 30 percent, causing prices to soar, Zhang said.

Darby Deeds, owner of Computers To Go in Bellevue, said in mid-October he made an order for 500-gigabyte hard drives, which are used to build and repair computers, for $40 apiece. As of Friday, the same drives carried a price tag of $99.

Across the board, consumers buying computers as gifts this holiday season should expect that to translate into at least a 10 percent price hike on all computer purchases, he said.

With that inflation sending the prices of PCs upward, Deeds said he has noticed that his sales to business clients, which include some sales to Offutt Air Force Base, haven’t slowed. He expects that to continue through the shortfall.

“Their reaction has been — ‘We’ve got to have it,'” Deeds said. “They’re not changing anything.”

That spells bad news for Nebraska Furniture Mart, one of the area’s largest electronics retailers.

Bob Batt, executive vice president at the Berkshire Hathaway-owned Furniture Mart, said the disaster in Thailand reminds him of the catastrophic earthquakes and tsunami that blasted Japan and disrupted electronics supply chains earlier this year.

“We’re not expecting good things,” Batt said. “We’re monitoring the situation and will take the appropriate action. It’s that kind of a deal. Time will tell.”

Computer companies that have been pinched by weak demand in the United States and Europe are bracing for the hard drive shortage to compound those issues.

Analysts have said that the drives that are available will first go to companies with top priority, like Dell and Hewlett-Packard, for example.

Still, those producers remain concerned. In a statement, Dell said that it anticipates hitting the low end of its fourth-quarter revenue projections because of the disaster in Thailand.

The industry prioritization, however, means companies like Acer and Asustek, both of which make cheaper netbooks and desktops for consumers with a tighter budget, are more likely to get shorted in the supply chain.

“The situation is severe, but the exact timetable for a full recovery is unknown at the current time,” Acer said in a statement. “There will definitely be price hikes for HDD storage, but the magnitude is uncertain for now and would most likely be transferred to end users.”

Apple officials have said they expect an industrywide shortfall, but aren’t sure how things might play out for their company.

“Like many others, we source many components from Thailand,” Apple’s chief executive Tim Cook said during a conference call with analysts and journalists. “It is something that I’m concerned about. How it affects Apple, I’m not sure.”

Schrock said that although tablets like the Apple iPad are already popular, the Thai floods could push more consumers in that direction rather than spending more on overpriced PCs.

For now, though, those affected by the supply chain disruptions aren’t throwing in the towel on this holiday shopping season.

“It’s not pretty, but we just don’t know what’s going to happen,” Batt said. “Bad news comes along from time to time, and this is one of those times.”

What is Adaptive Intelligence Technology
from Schrock Innovations?

Do you want a faster computer?